Since we’ve started Diner Nation, we’ve touted that we are two diners who love diners, but to date, Robyn has been the voice behind the entries. This week I thought I’d try my hand at it, and hope that I fare as well as she.

The Vincentown Diner has been a staple in the region for as long as I can remember, though I’ve only visited a handful of times. It has been on our short list of diners to patronize, particularly since it received a favorable review from The New York Times and was featured on Diners, Drive-Ins, and Dives. With it being this week’s Coffee Pot Pick, this was the perfect time to revisit it. So, Sunday afternoon, Robyn and I piled in the car with Hayden in tow and set out on the half-hour drive up Route 206.

What’s immediately striking is the size of the place. Unlike some of the smaller diners around here, Vincentown can probably hold 200 people or more. Not what I’d call cozy, for sure, though it did seem promising – if a joint that size can stay in business for as long as it has, then the food inside’s gotta be good.

There was no wait, so, with tables available, we were seated immediately. We were handed our menus and assured a server would be right with us. So we waited. And waited. And waited. In fancier restaurants, one expects there to be a bit of time before seeing a server. In diners, though, it’s been our experience that someone should come over, introduce themselves, and at least take drink orders within five minutes. Right at the five-minute mark, a server (who never identified himself) came and asked with some alarm if our drinks had been taken. We gave our orders – two coffees and a water – and he went away. Thirty seconds later another server came (I think it was actually her station since she had the tables around us), but left when we said we were being waited on.

Both The New York Times and Diners, Drive-Ins, and Dives recommended the Greco Burger made with Jersey-raised lamb, so naturally none of us ordered that. Robyn went with the steak and eggs, I went for the tuna melt with sweet potato fries (and a bowl of the cream of carrot soup), and Hayden ordered a pork roll, egg, and cheese sandwich (I think he’s on a mission to find one as good as the ones he makes at home).

My soup arrived in short order, and I was eager to dive right in. I should have waited a few minutes for it to cool down, though, because it was so hot I couldn’t taste the soup. Once I regained sensation in my tongue, I enjoyed the sweet flavor of the carrots mixed with the light cream of the rest of the broth. I gave Robyn – who is not a fan of cream soups – a taste, and she absolutely loved it, too.

Hayden was uninterested. He had to save room for the pork roll, which arrived shortly thereafter. When he ordered his meal, he was given the option of having the sandwich on a bagel, an English muffin, or a brioche bun. Since he usually opts for a Kaiser, he went for the closest thing – the brioche. After sufficiently doctoring it up with ketchup, yellow mustard, and hot sauce (teenagers; it’s a wonder they survive to their twenties with their taste buds intact), he took a bite and declared it good. He liked the thickness of the pork roll – “better than the other place,” he said, referring to last week’s diner – and really enjoyed the home fries that came with it.

Robyn absolutely adored the home fries that came with her meal, too. They were actual potato wedges, roasted and flavorful, not the mushy fried slices that often pass for home fries in other establishments. Her eggs were also exactly how she ordered them – over light. Her steak, however, required a generous dollop of Lea and Perrins steak sauce to provide sufficient flavor. (To provide context, I have seen Robyn eat steak on numerous occasions. This was the first time I’d ever seen her ask for and use steak sauce, which told me everything I needed to know.)

My tuna melt was served with Swiss cheese and served on marble rye, which was a nice touch (tomato comes standard on it, but I opted out as I cannot stand raw tomato). With virtually every other tuna melt I’ve ever ordered in a diner, the sandwich was served open face, with two individual slices of grilled rye heaped with tuna and melted cheese on top. This tuna melt was served as a regular sandwich, with the tuna between two slices of cheese and bread. It was tasty, don’t get me wrong, but it was closer to a grilled tuna salad sandwich. It was not a tuna melt. That being said, the sweet potato fries were some of the tastiest I’ve ever had, and well worth the $1.99 upcharge.

We opted out of dessert, which several other reviews tell us may have been a bad decision, and asked for the check. (It was only by examining the check that we learned that our server’s name was Frank.) We paid the bill and went about our merry way.

I’ve read great things about Vincentown Diner and have fond memories from years ago, but our experience was mixed. It definitely has more of a restaurant feel than that of a traditional diner, though I appreciate that they don’t feel the need to chrome-and-neon themselves up to fit in with other diners. Perhaps when we find ourselves up that way again, we’ll take advantage of some of the more signature dishes on the menu and have a better experience.

Except Hayden. He’ll probably get the pork roll. 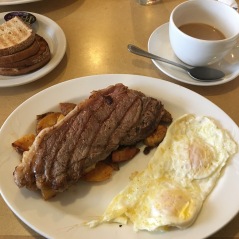 Steak and eggs with home fries