Joe and I got back on the diner circuit. We headed North and ended up in Monmouth County. That ambiguous place called Central Jersey where you don’t know if you’re in Pork Roll country or Taylor Ham territory until you look at a menu.

After a long day of driving and exploring, a beacon in the shape of a neon blue sign of the Blue Swan Diner came into view and we knew we found an oasis. We got there a bit before the dinner rush and were pleasantly surprised to be seated immediately in an absolutely gorgeous back room. We were alone in the room and it was very easy to picture the bridal and baby showers that had undoubtedly taken place in there.

Our waitress, Kayleigh, came over and introduced herself, and took our drink orders. A long day of driving and exploring? That will be two coffees, please! She brought them promptly and we asked for another minute to peruse the menu. Then, we spotted it. The Blue Swan Diner in Monmouth County is in Taylor Ham territory. No matter, we chose our dishes and placed our order.

I chose the Open Faced Turkey Sandwich, with mashed potatoes and gravy. It came with coleslaw, a pickle and cranberry sauce. Joe opted for a Patty Melt with a side of onion rings. It, too, came with a side of coleslaw and a pickle. We sat back and enjoyed the quiet atmosphere of the diner before the rush. There were other people dining but it wasn’t unnecessarily loud.

Kayleigh approached us with two dishes in her hand. It couldn’t be our meals already and they were smaller. It was the coleslaw and the pickle served as an appetizer! How novel! The idea was genius! I’m not a fan, but always save my coleslaw for Joe. It was nice to have something to nibble on while waiting without having an extra served dish. I’m always disappointed in myself when I order an appetizer because I’m so hungry, only to no longer be hungry when my entrée arrives. This is an amazingly simple solution. Kudos to the Blue Swan.

Just as we were wrapping up our pre-meal snack, our entrées arrived. The first thing I noticed immediately about my turkey sandwich was that it filled the plate. It was a heaping portion of sliced turkey on three slices of bread covered and smothered with gravy, as was the mashed potatoes. This wasn’t deli sliced sandwich meat. These were thick slices of real roasted turkey.

I made a cut and took my first bite. Years of the Thanksgiving memories ricocheted around the inside of my brain. This tasted homemade. Like Thanksgiving leftovers. Collecting myself for a moment, I wondered if I was just really hungry. I dove in and each bite was better than the last. It didn’t take long to completely devour every morsel.

Joe’s patty melt came with cheddar cheese instead of the standard Swiss, and the onions were caramelized instead of fried. While the taste at first was unfamiliar, it was more than a pleasant surprise. When paired with perfectly fried onion rings instead of French fries, you get all of these nuances that put a new spin on an old classic.

At each interval, our server was attentive without being disruptive, and showed genuine enthusiasm for her job and the diner. Our coffee mugs were never empty and neither were our water glasses. Awesome food and amazing service at the Blue Swan Diner in Oakhurst, New Jersey!

Until next time, happy eating!

Counter in the main area of the diner.

Room where we were seated 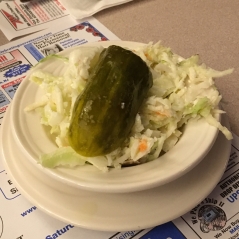 Coleslaw garnished with pickle served as an appetizer.