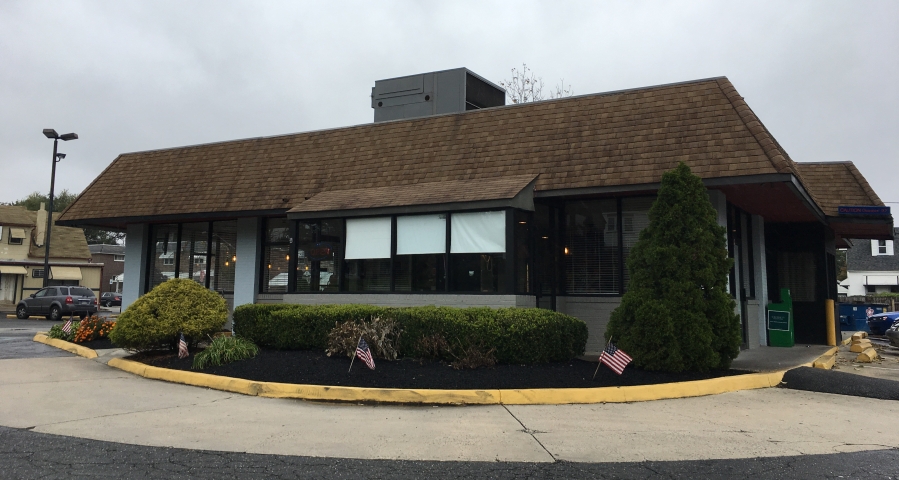 Two weeks ago, our weekend excursion took us to Chester, Pennsylvania.  It was a beautiful drive through older neighborhoods. The light rain definitely didn’t dampen our mood. Our destination: Chester Rural Cemetery. I know, I know. It almost seems morbid that every diner visit starts at a cemetery. Then again, when you’re researching your family tree, cemeteries actually become really exciting places. No? Okay, we’ll have to agree to disagree.

After making our way through the beautifully kept cemetery, we needed a place to warm up. As we weren’t familiar with the area, we asked Miss Google to help us out in finding a close dining spot. (We actually weren’t even looking specifically for a diner!)  She directed out the back gate, making a right onto Upland Avenue and driving about the length of two blocks.

We found ourselves at the Upland Diner. The outside was small and unassuming, leading us to wonder if it was a repurposed building. The foyer was a little dated and was in stark contrast to the diner.  The diner was furnished beautifully. It was one large room. There was ample lighting and the seating was comfortably arranged. There were a few televisions in the corners, a large clock and two chalkboards on either side of the room that were announcing seasonal specials with festive decoration. It didn’t have a counter, but it didn’t detract from the overall look or even the feel of space.

We were greeted and seated and looked over the menu. We ordered the requisite coffees, were informed of the soups of the day and studied the menu. I was in the mood for something different but uncomplicated. Early on in our adventures, my go to dish was an egg plate and sometimes, I default to easy. But what fun is that?

The soups of the day were beef barley and cream of crab. Beef barley is Joe’s absolute favorite. I’ve made no secret that I was previously not a fan of cream soups, but recently I have stepped out of my comfort zone and have really enjoyed them. With that, I decided I was going to try the cream of crab soup.  Joe ordered the meatloaf panini and I ordered the chicken fajita wrap.

We enjoyed our coffee while we waited for the soup. The coffee was a lighter brew than we were used to. It wasn’t bad at all, definitely fresh, just maybe a breakfast blend.  The soup arrived and my cream of crab smelled heavenly. Joe dug into his soup and he made that “omagosh” face where his eyes roll up into his head and you know it was a good choice. (One of these trips I will take a photo of it so you know what I mean.) There was a little bit of a surprise flavor in the soup: green pepper. It wasn’t overpowering and really added another layer of flavor to the soup. He moaned with delight until he didn’t. Apparently, his beef barley soup had a second surprise ingredient: mushroom. Joe and mushrooms are not friends. He didn’t think to ask because he’s never encountered beef barley soup with mushrooms. He scooped them out, shuttered, and went back to devouring what was left.

Now, I need to tell you about this cream of crab soup. I’m not sure exactly how to describe it but it.was.phenomenal. Hands down the best soup I have EVER had in my life. I’m usually leery of seafood-based items that are not prepared by me or at a restaurant at the shore. I have never been so happy to be wrong. I didn’t dare put crackers in it because that meant I would’ve had to put my spoon down.  Before I knew it, my cup of creamy deliciousness was empty and my finishing school training wouldn’t allow me to lick to the bowl. Yes, it was THAT good that I almost risked it. (This soup is definitely giving the Millville Queen a run for their money…or soup!)

Onto the entrees! Joe’s meatball panini was a fun mix of comfort food and convenience. The only disappointment was that the meatloaf wasn’t situated evenly on the bread, so one half of the sandwich was pretty hearty while the other side was pretty bare. It was extremely tasty and the French fries were nice and hot. Ketchup was the requisite accoutrement since he was having both meatloaf and French fries.

My chicken fajita wrap look pretty fancy on that square plate but my soup was going to be a hard act to follow. I added a little smear to the end for the first bite and felt myself imitate Joe’s “omagosh” face. I’m not even sure if I could recommend anything that could be added to make it better. Even the underside of the wrap was slightly grilled to provide a neat closure and make sure that the wrap stayed deliciously intact. I was delightfully satiated with the sandwich. It seemed lighter than a traditional fajita (or even a wrap for that matter) which would undoubtedly send me straight to the teetering edge of food coma. Since I wasn’t stuffed, I did try some of the French fries. They were warm, fresh tasting and not greasy at all.

Our server, Jennifer, was really nice and all-in-all, it was a great visit. If you’re in the area, check them out!

Chalkboard menu on one side of the diner 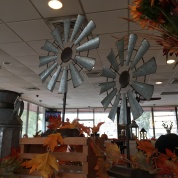 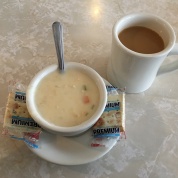 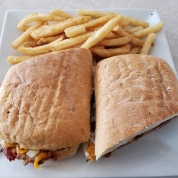 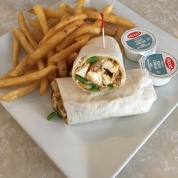